The hoof wall is made up of an interlinked outer insensitive layer (horn) supported by an underlying inner sensitive layer (laminae). In laminitis, the blood flow to the laminae is affected, resulting in inflammation and swelling in the tissues within the hoof, and severe pain. As the laminae are starved of oxygen and nutrient rich blood, the cells become damaged. Unless the cause is removed and treatment is started immediately on first signs of the condition, the sensitive laminae begin to die.

The laminae are responsible for supporting the pedal bone in the hoof and thus the weight of the animal. In severe cases of laminitis the pedal bone can sink and rotate due to the inability of the damaged laminae to support it and from the pull of the deep digital flexor tendon. If the pedal bone sinks too far it can be seen to protrude from the sole of the foot. In many cases this is irreversible, however, some cases can be cured, although this requires a lot of time, patience and money.

Laminitis can affect any of the feet but is more commonly seen in the front feet. Any horse or pony can be affected by laminitis. 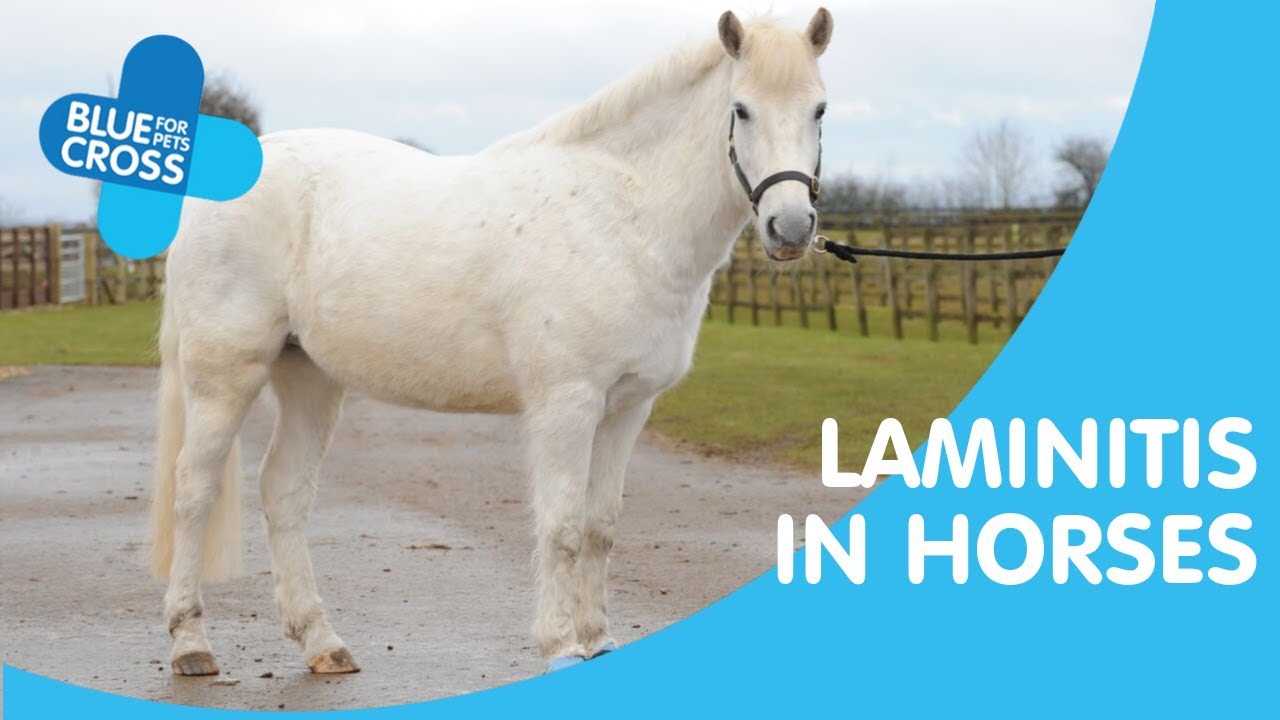 A number of different factors can cause laminitis or predispose a horse to getting the condition. Animals that are overweight or have suffered previously from laminitis are particularly susceptible.

Diseases linked with inflammation can cause laminitis to flare up, such as:

Cushing’s disease: This condition is associated with an abnormality in the pituitary gland, which is found at the base of the horse’s brain. As a result of this abnormality the horse can suffer from excessive thirst and appetite. The coat becomes very curly and the horse generally sweats a lot and can lose weight. In addition to these symptoms, horses do, in many cases, suffer from laminitis as a result of having Cushing’s disease.

This can be associated with a fracture or infected joint which will force one leg to bear more weight. The leg that is bearing more weight will be at an increased risk of laminitis.

When an excessive amount of these components are ingested it causes an overload in the digestive system with undigested sugar and starch pushed through to the hindgut.

Bacteria breaks down the undigested material causing acidity in the hindgut, which kills the bacteria that digests fibre. As the bacteria die they release toxins into the gut, which are then passed into the bloodstream through the gut wall. These toxins provoke a response within the horse that is thought to disrupt blood flow, which, in the feet, can cause laminitis.

A dramatic change in environment and/or frequent travelling, particularly for overweight animals, can trigger laminitis. Mares are also at risk shortly after foaling because of the additional physical stress.

Toxaemia (blood poisoning) can result from any conditions where an animal suffers a severe bacterial infection, such as retention of the placenta after foaling, a severe colic attack or prolonged diarrhoea.

Many horse owners are inclined to overfeed their horses. When a horse is receiving more calories than it’s able to burn off it can quickly put on weight. This can be very detrimental to the horse’s health if it turns from being overweight to obese. Excess weight adds an increased strain on the horse’s vital organs as well as its limbs. It’s important for all horse owners to remember that the native breeds can live on average pasture very easily and would very quickly become overweight if allowed to graze fertilised cattle pasture.

This can be a common cause of laminitis. If a horse has been worked fast and for a prolonged period of time on a hard surface (such as trotting on roads) this can affect the laminae, especially if the horse has poor quality hooves. With the laminae suffering trauma in this way it can bring on a bout of laminitis.

The horse will show an inability or reluctance to walk or move and may possibly lie down, displaying an unwillingness to get up. The horse will be visibly lame especially when moving on a circle or on a hard surface, and will have an increased digital pulse in the foot.

The horse, when standing, may well lean back on to its hind feet in order to relieve the pressure on its front feet. The horse will have pain in front of the point of frog and when walking may place its heels down first rather than its toes. There can also be symptoms shown vaguely similar to colic.

A horse with chronic laminitis will show signs of ongoing symptoms that are generally a result of a relapse from previous attacks.

The horse’s hoof will have the appearance of growth rings around the hoof wall, which generally indicates that it has suffered from laminitis in the past. However, these should not be confused with hoof rings, which are due to changes in nutrition or to stress.

The heel will often grow faster than the toe and the white line in the hoof will have widened. The horse may well have a large crest, which runs along its neckline. 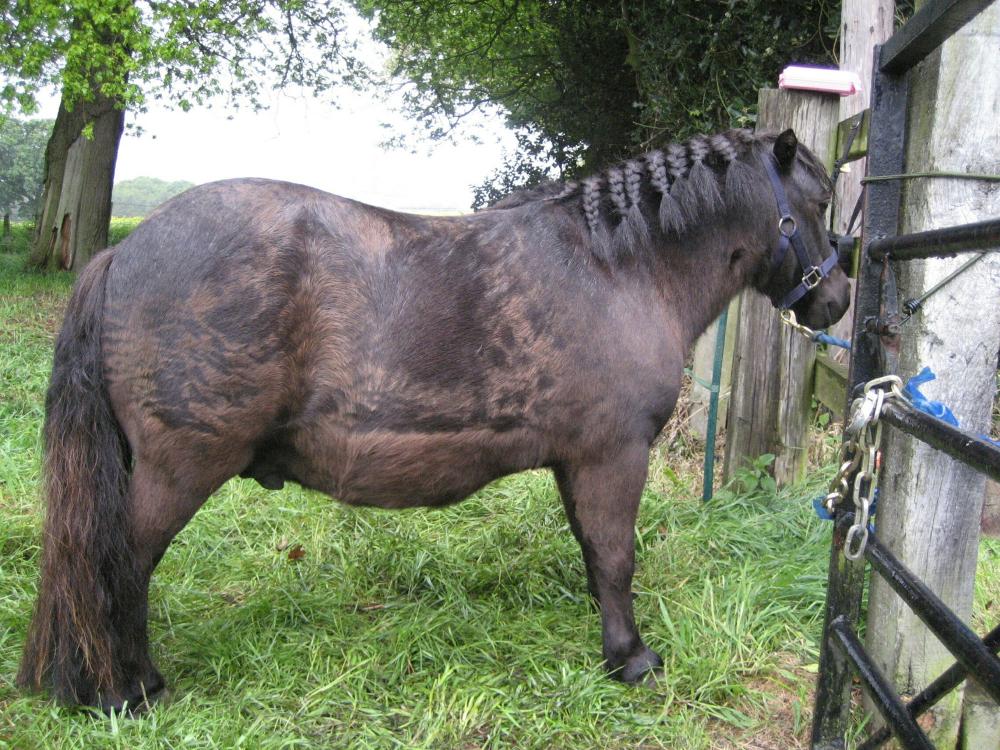 If a horse or pony displays these symptoms it is important to call a vet immediately and follow treatment plans carefully. Correct treatment needs to be administered as soon as possible to prevent any lasting damage to the feet and provide pain relief.

It is advisable to move the horse or pony to a smaller pen/stable and bed the area down with a deep bed of shavings, cardboard or sand. The bedding needs to be able to mould into the hoof and around the frog to provide support.

It is important to remove any feed, including molassed licks, but always ensure that fresh clean water is provided. It is also vitally important that the horse is not starved due to predisposition to hyperlipaemia in obese ponies. The vet will be able to advise on a suitable diet.

In order to minimise stress to the laminitic horse, make sure that it has a companion nearby. Stress can be a contributory factor to laminitis so it is vital that your horse is placed in an environment where it feels comfortable.

Horse owners should not be tempted to stand horses or ponies suffering from laminitis in a stream or to cold hose their hooves. Although it may initially make the animal more comfortable, prolonged cold will make the condition worse.

The vet may advise that x-rays need to be taken of the feet to show how much (if any) rotation has occurred. A farrier may also need to attend under vet supervision to correct the rotation and make sure the feet are in the best condition to facilitate recovery.

Horse owners should monitor their horses’ diets carefully. Feed company helplines can give advice on the best products to feed individual horses. All horse owners should remember to feed in accordance to their horse’s workload and type. Dieting ponies and horses should be given around 1.25-1.5 per cent of their body weight in food – this includes any grass and hay intake.

Follow the rule of feeding little and often. This mimics the horse’s natural feeding pattern and will help keep the digestive system working correctly. It will also satisfy the horse’s need to chew and prevents boredom.

Never starve a horse or pony as this can lead to serious health problems such as hyperlipaemia and only feed high fibre, low carbohydrate and low sugar products. It is best to avoid feeding cereal mixes and molassed products. In order for the horse to maintain a healthy hindgut, a probiotic supplement can be added to the horse’s diet.

Restrict grass intake by using electric tape to strip graze. Ponies can survive on very little. Grass is very high in soluble carbohydrates (fructans), which can lead to laminitis if ingested in large amounts, especially in spring and autumn.

Sometimes turning a horse out at night and bringing it in during the day can help as there are less fructans in the grass at night.

Do not turn a horse out on lush or frosted grass. Try to work with the land owner to decrease the sugary ryegrasses and clover in the sward and allow more traditional grasses and herbs to flourish.

Turn out a group of ponies that need the same management together. This will minimise stress, keep them occupied and allow them to carry out normal behaviours whilst still being restricted. This will also prevent depression. Always turn horses out with at least one companion.

Ensure a farrier attends to their feet strictly every four to five weeks, depending on the horse. This will ensure that the foot is in the best possible condition to prevent laminitis. Feed supplements can be given to promote good hoof growth.

As soon as the horse/pony becomes slightly lame or ‘pottery’, remove it from the grass until it is completely sound.

Check the horse’s crest on a regular basis; if it becomes hard, remove the horse from the grass immediately until it softens.

Check the horse’s digital pulses daily as changes can then be detected quickly and the appropriate action can be taken.

To help with maintaining the horse/pony’s weight, see the All About Pets leaflet Obesity: prevention and management (H15).

Make sure the horse/pony is wormed regularly following a vet-approved programme.

Laminitis is a very painful and debilitating disease. Prevention is always better than cure. When it is not treated quickly or correctly it can cause permanent damage, which may result in euthanasia.

Getting a horse, Health